Thoughts on tango and the learning process

hypnosis: 1. a state that resembles normal sleep but differs in being induced by the suggestions and operations of the hypnotist with whom the hypnotized subject remains in rapport and responsive to his suggestions, which may induce anesthesia, blindness, hallucination, and paralysis while suggestions of curative value may also be accepted. 2. any of various conditions that resemble sleep. (Webster’s Third New International Dictionary, Unabridged.)

There are a number of ancillary techniques considered beneficial for tango, given that, as a form of dance, it uses the body as both raw material and expressive form. These include strength-building exercises, pilates, tai chi, Alexander technique, yoga, meditation, and various tango-specific movements. To varying degrees and in different ways such techniques help improve posture, balance, agility, and awareness, and, therefore, our tango. As with many things in life, sometimes there are no shortcuts to success. 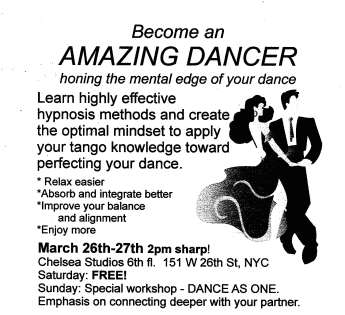 Not long ago I came across a flyer, which had been placed on my table one evening at a milonga. I was surprised, amazed really, to discover that hypnosis was being used as a tool for improving technique. Not only because this was the first time I’d heard of hypnosis and tango being mentioned in the same sentence but also because the juxtaposition seemed so jarring. Unfortunately, I was unable to attend the workshop and can only speculate about how the hypnotic arts might contribute to the development of tango as actually practiced. (Ironically, the only reference I was able to find concerning tango and hypnosis was a negative one: “Nobody is barking like a dog or doing the tango while under a hypnotic spell.” [“Potent Practice,” by Bob Condor, Chicago Tribune, September 28, 1995.])

Hypnosis, of course, has a long and clouded history going back to the time of Franz Mesmer. It grew in popularity throughout the nineteenth century and was used by charlatans as well as by legitimate researchers, primarily in the field of medicine and what was later to become psychoanalysis. Among its best known practitioners at the time were Joseph Breuer and Sigmund Freud.

If we are familiar with hypnosis at all, it is often in association with seances and table-turning, with spiritualism in general, which was once the subject of much heated speculation but is now largely out of fashion. Given its notoriety, it should come as no surprise that it would find its way into literature, particularly gothic romances and tales of the macabre. Poe, for example, in describing the behavior of a dying man under the influence of hypnosis in “Mesmeric Revelation,” responds to the doubters and the incredulous.

Whatever doubt may still envelop the rationale of mesmerism, its startling facts are now almost universally admitted. Of those latter, those who doubt, are your mere doubters by profession—an unprofitable and disreputable tribe. There can be no more absolute waste of time than the attempt to prove, at the present day, that man, by mere exercise of will, can so impress his fellow, as to cast him into an abnormal condition, of which the phenomena resemble very closely those of death, or at least resemble them more nearly than they do the phenomena of any other normal condition within our cognizance…

With considerably less irony, the founder of the “talking cure” wrote at length about the efficacy of hypnosis in treating hysteria in his early work, Studies on Hysteria, cowritten with Breuer. The results were mixed and after several attempts with a number of patients (almost all young women from bourgeois families), he concluded that it would be better—or, at least, equally productive—to eliminate the attempt to hypnotize his patients but retain the other aspects of the encounter.

When, therefore, my first attempt did not lead either to somnambulism or to a degree of hypnosis involving marked physical changes, I ostensibly dropped hypnosis, and only asked for “concentration”; and I ordered the patient to lie down and deliberately shut his eyes as a means of achieving this “concentration.” It is possible that in this way I obtained with only a slight effort the deepest degree of hypnosis that could be reached in the particular case.

But what is so curious about the flyer and the introduction of the idea of hypnosis is the question of who is hypnotizing whom? Do we become “amazing dancers” by hypnotizing potential dance partners, for example, or, through an act of group hypnosis, by mesmerizing the surrounding crowd? Or is it, rather, a matter of self-hypnosis? Can we hypnotize ourselves to become “amazing”? Can we improve balance and alignment by a form of mind control? Or any aspect of our physical development, for that matter? The practice of auto-suggestion has been used and recommended for motivational therapy, dieting, pain management, and the control of addiction among other things. And dancers have been known to use techniques that improve self-awareness and focus, including meditation and mindfulness. But hypnosis is a form of control and submission to an external will; there is no question of awareness, much less self-awareness. If anything, such a “self-conscious” attitude might actively impede the attempt to create a hypnotic state in someone. Freud does discuss instances of auto-hypnosis in Studies in Hysteria but only in connection with a pathological state.

The tendency to auto-hypnosis is a state which is to begin with only temporary and which alternates with the normal one. We may attribute to it the same increase of mental influence on the body that we observe in artificial hypnosis. This influence is all the more intense and deep-going here in that it is acting upon a nervous system which even outside hypnosis is abnormally excitable.

Presumably “abnormal excitability” is not what we are striving for in our attempt to become better at what we do. The question remains, therefore, just how hypnosis can be integrated into tango and how it might actually work in practice. The closest explanation I’ve found comes not from a tango source but from someone who uses hypnotic techniques to influence behavior for purposes of self-improvement. (In the following quote, Harry Matthews is a writer and a member of Oulipo, whose best-known practitioner was Georges Perec.)

What [Harry] Matthews is describing here—finding that his world-view changed when he shifted his focus from writing “about” his thoughts/feelings about the world to solving “playful procedures”—is exactly what can happen in hypnosis. Like the language-game procedures that entice Matthews and other writers/artists, hypnosis is a playful way to distract the mind from it’s habituated patterns of inner-reflection, which often have the tendency to run amok in confusion and doubt.

The silencing of “inner reflections” run amok appears to resemble the effort to quiet the “monkey mind” found in yoga and meditation. What is curious is that hypnosis is here employed as a distraction. In other words, we get the mind to refocus its attention not on our “habituated patterns” of thought but on something else, presumably something creative and unexpected. Unlike meditation, however, it is not intended to bring about a state of quietude or peace. Now, trance experiments have been used for years by writers to create altered states of mind from which a stream of unrestricted creative impulses can flow. They are found among the Surrealists, who practiced various forms of “automatic writing” (the poet Robert Desnos, was, apparently, very successful with such methods), but a similar affection for “unreason” and mind altering states is present at least as far back as Rimbaud (De Quincy employed opium as his muse). Such techniques were used to provide a direct connection to the creative spirit without the need to have recourse to the obfuscations and interferences of the rational mind and its obsession with the world “outside.” But it is unclear how this might translate into an improvement of posture or balance in tango, or physical movement, generally, which is unquestionably enacted in the real world. The possibilities, however, are many and intriguing.

“As you wish,” concluded one of the guests, “but if you don’t believe in magnetism after this, you’re an ingrate, my dear sir”!

You are currently browsing entries tagged with hypnotism at Tango High and Low.